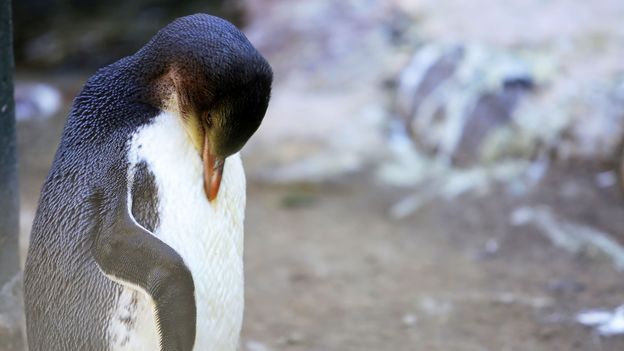 Vets in Dunedin, New Zealand, are making strides in helping endangered penguins. Determined, yet bitten and flipper bashed, they’re treating these patients one bird at a time. By Sharron Ward 23 April 2021
Sometimes, saving a species means treating one animal at a time. The veterinarians at The Wildlife Hospital, Dunedin do just that, going small to go big by caring exclusively for native animals. Headquartered close to the wildlife-rich Otago Peninsula on New Zealand’s South Island, the hospital is ideally placed to help where it’s most needed. And with extinction threatening up to 80% of native wildlife, from kākāpō birds to sea lions, every mended bone and tended orphan could be the difference between a species thriving or dying out. 50 Reasons to Love the World – 2021 Why do you love the world?
“Because I get to work here on the beautiful Otago Peninsula helping to save the yellow-eyed penguin, a very endangered bird here in New Zealand, and save it for our future generations” – Jason van Zanten, conservation manager
More Reasons to Love the World
It’s high-stakes work, but you wouldn’t know it from watching the hospital’s best-known patients waddle around between feedings. The yellow-eyed penguin, called hoiho (noise shouter) in Maori, is the largest of the penguin species that live and breed on New Zealand’s mainland. But in recent decades, plummeting numbers have landed the birds on the country’s nationally endangered list, making this yellow-eyed seabird one of the rarest penguins in the world.
Hoiho are among the world’s most endangered penguin species, with just an estimated 4,000 to 5,000 adults left in the wild, and they arrive at the hospital for a variety of reasons including starvation, injury and disease. But each animal has a better chance at survival than ever before, thanks to the combined efforts of The Wildlife Hospital and Penguin Place , a nearby recovery home that has been helping the hoiho since the 1990s.
You may also be interested in: View image of Penguins arrive at the hospital for a variety of reasons including starvation, injury and disease (Credit: Credit: Sharron Ward)
Before the hospital’s opening in 2018, sick or injured endangered species had to first survive stressful transport to the North Island for treatment. With the ability to treat these animals locally comes a higher success rate that directly supports rare and endangered South Island animal populations.
The hospital’s staff is devoted to the penguins yet harbour no illusions about their feathered patients. “They want to bite you, they want to flipper bash you, they poop all over you, but we love them,” said hospital founder Dr Lisa Argilla, showing scars from 13 years of treating yellow-eyed penguins.
The penguins’ road to recovery doesn’t end at the hospital. Animals on the mend continue their convalescence at Penguin Place, where they rehabilitate and put on weight before their release.
About 95% of the birds brought to the facility survive to be released back into the wild. Compare that high percentage to the small number of breeding pairs – just 265 on the South Island, according to a 2019 estimate – and the impact becomes clear.
“If Penguin Place wasn’t here, I could almost guarantee that the population would be functionally extinct,” said Jason van Zanten, conservation manager at Penguin Place.
Like the endangered species it cares for, however, the fate of Penguin Place teeters on the brink. The facility is entirely funded by the guided tours it gives to visitors, so the pandemic has hit Penguin Place particularly hard. The centre is mere months away from running out of the funding it needs to feed and care for its penguin patients. View image of At Penguin Place, about 95% of the birds brought to the facility are released back into the wild (Credit: Credit: Moritz Wolf/Getty Images)
Conservation efforts have long intertwined with tourism in New Zealand. For decades, people have flocked to the Otago Peninsula’s wild coastlines, towering headlands and sheltered bays, hoping to glimpse resident sea lions, seals and penguins. And though the international visitors – and the tourism dollars that support preservation programmes – have not yet returned, the people who look after these wild animals remain. Determined, bitten and flipper bashed, they care for these endangered animals, one bird at a time.
(Video by Sharron Ward and BBC’s The Travel Show; text by Christine Sarkis)
BBC Travel celebrates 50 Reasons to Love the World in 2021, through the inspiration of well-known voices as well as unsung heroes in local communities around the globe.
—
Join more than three million BBC Travel fans by liking us on Facebook , or follow us on Twitter and Instagram .
If you liked this story, sign up for the weekly bbc.com features newsletter called “The Essential List”. A handpicked selection of stories from BBC Future, Culture, Worklife and Travel, delivered to your inbox every Friday. Follow BBC Travel